Maybe one day the pain won’t feel the same;
Me and my people won’t be lost in tears dancing in this hurricane.
Our blood won’t keep getting splattered on concrete as if it’s art for their eyes.
It’s a shame it’s 100+ years later… and killing black people is still a consensual crime.
For far too long we’ve been told to move on with our lives because we’re no longer
shackled in chains.
Naively we’ve blindly followed suit and believed in a conditioned lie of freedom that
continues to be offered up by the white noise.

For too many years little black boys and girls have been robbed of their
beautiful history.
Only being taught of the oppressor… ensuring that the truth of their crimes are
forever left a mystery.
When they teach of the colonizers they don’t mention the gallons of blood spilled
and countless number of bodies that were wrongfully beaten until the tired souls
gracefully floated to freedom.
So just know when you all weave together thoughts spitting out syllables from your
tongues asking why this course is needed,
You’re also asking why an entire race that built this country doesn’t deserve to
be disgraced

But hey…
Maybe one day the system won’t be the same.
Me and my people won’t be paralyzed by their stare, frozen in this hurricane.
Our image won’t keep getting altered, making racial comments awkward.
It’s a shame it’s 100+ years later… and killing black people is still a consensual crime.

But really, what do I know?
I’m just a minority.
Who’s destined to end up behind bars with 3 or 4 kids I’ve left fatherless.
I’ve got a brown soul.
Living in a vessel that society treats so cold.
Destined to end up another name shouted at countless protests
Cause in America… the land of the free,
My melanin makes me a walking target.
A consequence of my lack of representation in the classroom that feeds the
ignorance of the contrasting students that surround me.

Maybe one day the pain won’t feel the same.
Me and my people won’t be lost in tears dancing in this hurricane.
But for now I’ll stand here today, pleading my case.
Asking that you all allow the broadcasting of our magic that’s been
effortlessly erased.

It’s far overdue that the children of the world learn of not only the horrors but also of
my ancestors’ revolutionary breakthroughs.
Cause they were more than secretive affairs or gateway stairs
Africa’s more than little boys with dirty faces and girls whom are checked off the lists
of America’s capitalistic databases
All of us here before you today are more than jail bound statistics and our deemed
distasteful yet glorified characteristics.
And it’s far past overdue that these sickening false narratives are debunked
and ridiculed.

So I ask you…
As you all continue painting the world with our blood,
Crafting each narrative to your advantage,
And framing photos in our skin…
Tell me, how much longer will you all sit up there on your comfortable high horses
and let history repeat itself yet once again? 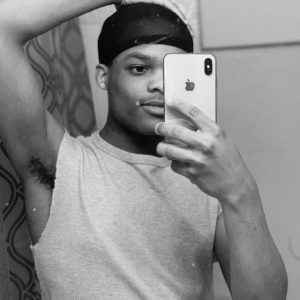 My name is Earl Mack Williams JR., I’m from Dallas, TX and I have hopes of one day being known creatively as @CONCEITEDKID, specifically in the music industry as a songwriter. Thus far, I have been published in one book and had the pleasure of traveling to Austin, TX to read my poem DANCING IN THIS HURRICANE to the Texas State Board of Education and made history by advocating for the approval of African American Studies to be offered in schools all over Texas and having it approved. As for any future creative achievements, I’m unsure but I know I’ll continue writing and won’t let my gift waste away.

by Michaiah Anderson, The 826 Dallas Project

In this personal narrative, a student describes their family origins with an intimate point of view