Save PDFs to your computer or to Google Drive.

Save only this sample

In middle school I spent hours scrolling through Instagram. I liked looking at my friends posts and receiving likes from people when I posted something myself. It was innocent at first, but as I approached the last week of my eighth grade year, Instagram became the battleground for the final confrontation I had with a middle school bully. For privacy purposes, I will call her Ann.

Ann and I had been feuding at school for about two years, but we never had an actual argument that consisted of more than just a few insults passed along through mutual friends or a mean remark that was met with a sneer. We had blocked each other on Instagram, so we couldn’t communicate there either, or so I thought.

One day, Ann had done something particularly nefarious during the school day. I won’t get into details, but I went home that day feeling very angry and hurt. Because of this, I did what any young girl looking for an escape would do: I took to Instagram.

After about five minutes of scrolling, I came across a picture a friend had posted with Ann in it. The caption read something along the lines of, “I am so ugly lol.” Still feeling angry from the events that had unfolded earlier that day, I decided to comment on the photo. I wrote that my friend sounded like Ann because Ann would often say she was not good looking to garner compliments (and many young people are guilty of this).

What I did not expect is that Ann would reply to my comment. Within the next 30 minutes, we had started an entire comment chain on this Instagram photo, pouring out all of our pent-up anger towards each other, for the entire world to see. After a while, we stopped, and I am not sure if either of us felt any better. Eventually I just wanted both of our comments on that photo to disappear, so I would never have to look at them again.

Sadly, they did not disappear. The photo was left up for a couple more months before it was deleted, along with the comments. However, my mother had printed out screenshots of the comments to keep because they contained some pretty cruel comments. In one comment, for example, Ann told me, “I hope you kill yourself.”

While the whole incident eventually died out, I couldn’t help but wonder if anyone else had taken a screenshot of the post and its comments. I began to fear that someone would bring it up when I went to to high school, that this baggage would follow me to my new school. If my mother had a copy of what happened that day on Instagram, then surely someone else could have one as well. This incident really taught me to think about what I post about on social media because even if you delete something, it might not always disappear. 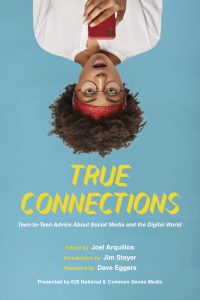 True Connections features young writers from around the country exploring their relationship with the internet, with social media, and with the digital world in general. From essays about internet addiction to explorations of digital disconnections, True Connections gives young writers the chance to ask big questions about what it means to strike a balance between real life and online life, and to remain true to oneself in both.

Invite students to write about their personal experiences with social media and online platforms with this lesson from 826NYC.

I Took My First Steps…

In this public narrative, a student makes the case for creating community change by building youth centers in her neighborhood.

In this public narrative, a student illustrates the hardships his uncle has faced to argue for a path to citizenship.