Save PDFs to your computer or to Google Drive.

Save only this sample

A teen discovers the power of books to transport him to another world, and shares his excitement about becoming a published author.

Lennox Library, I read on the metallic plaque outside the building. The uppercase letters were bold and big. The coldness of the metal resembled the weather; it was windy and arid. It was was the first time I was visiting this library. All the libraries that I had previously visited had a twenty-first century modern style. This one could not have been more different. The white pillars in front emanated an appearance of high intellect that greatly contrasted with the old-fashioned red brick walls.

I had the impression that when I entered the door, I would interrupt an eighteenth-century political debate, that I would find myself among men with wigs dressed in fancy aristocratic suits. The little garden up front gave me a sense of comfort. There was a small tree surrounded by grass. It was located exactly in the middle, making the scenery completely symmetrical. The small leaves of the young tree were disturbed by the wind, but each little leaf held tightly to the tree, not wanting to let go.

Not being dressed for the occasion compounded my aversion to the weather outside. The change of temperature was abnormal. Los Angeles is known for its warm weather and its beautiful beaches. With only a pair of jeans and a shirt, I swiftly made it through the door. Once I entered, I was overcome with great warmth, and I never wanted to leave the library’s cozy embrace. It was like waking up on a cold, rainy day and not wanting to leave the cocoon of your bed, made warm by a full night’s rest. It wasn’t just a change that made the library feel so much warmer than the world outside; the books radiated the warmth that I felt. I found myself in a different environment, a world in which books are the common heaters that families use during winter days.

The people inside transmitted their contagious desire to grab a book and devour every single page of it. They were all comfortably sitting down on couches all across the library, deeply focused on their selections. It was as if everyone was on the same page, like the members of an orchestra playing on of Chopin’s best symphonies, everyone flipping their sheet music to the next part of the song, making a determined and unified approach to the piano solo that everyone is anxiously waiting. A silent orchestra.

Similar to the facade, the inside of Lennox Library was like nothing I’d ever seen. The ocean blue carpet made the building seem like an immense sea of knowledge. The lime green walls reminded me of some kind of alien, as though it belonged to another galaxy. Lennox Library didn’t just warm my body; it teased me with the possibility of traveling to far off locations. I see a library like an airport, with each person traveling their own great distance—if only in the confines of their own mind. Here, books are my means of transportation, and it was only a matter of deciding where I wanted to go.

I had been two years since my last major journey, when I’d taken an airplane all across Mexico to move to the United States. That airplane transported me to a new country in which things were very different. The language barrier greatly impacted my efforts in school, but I took the challenge head on. I moved after finishing middle school and started as a freshman in high school. It was in this American high school that I discovered the power of books, a power that wasn’t made apparent at my schools in Mexico. Even though I attended a private school, supposedly to obtain a better education, I did not relate to books. The school failed to establish an intimate relationship between students and their books — the education system in Mexico did not encourage children to become avid readers, and there not many libraries in my neighborhood to fill in the gaps. And so, it was not until I came to the United States that I discovered the incredible dimensions to which I could be transported simply by reading a book.

My older brother, however, had made that discovery. Oscar was the only person from my family to have a strong connection with books. He had visited these fascinating dimensions decades before I had. He used books to venture into some distant land, becoming one of Harry’s closest friends at Hogwarts. Meanwhile, I was visiting Florence, Italy as one of the most dangerous assassins in history. My Xbox was my mode of transportation to the Renaissance, where I was Ezio Auditore, using the Animus to time travel and visit famous characters such as Leonardo Da Vinci and Niccolo Machiavelli. My parents could not see the virtue of my virtual travels. They believed it was a waste of my time and energy to play video games and did not fully appreciate the beauty of them. Their wishes came true when I was not able to bring with me my video game consoles to the United States. Dismayed by my sudden lack of imaginative transport, I was desperate to find another way to discover new worlds, and books delivered sweet relief.

I rapidly discovered the power of books and the infinite possibilities of each one, and I wondered why I hadn’t read more books in the past. My brother certainly knew about their secret function as function as a means to travel to incredibly places. But, why then? Why would he not take me as his companion on such marvelous adventures? Thinking on it now, I am certain my brother did not wish to interfere in my venture toward enlightenment and discovery, because he knew that this was an unaccompanied journey. I’ve now ventured to these dimensions, each one with something different to learn. I see now that works of literature are open to interpretation, and my brother did not want to spoil any of the stories by clouding my mind with his own opinions, opinions that I would accept as truths. I need to discover these stories and think critically about them for myself, and so I did.

I recently traveled back to Mexico to visit my family for the holidays. Oscar is married now. Although it would seem that our relationship would decay over years of living so far from one another, we were really thrilled to see each other again. Over our first dinner together, I told him about the books I’d encountered, and how I at one point felt disappointed that he hadn’t shared their magic with me but now understood that I had to make that discovery for myself. A smirk crawled across his face, as if to say I was finally ready, ready to join an ancient secret club to which he had long belonged, and finally he would welcomed his younger brother in as well. Of course, there was no actual club initiation, no secret handshake exchanged, no sacred wine sipped. But we continued to discuss some books that we read, and it felt amazing. I pictured myself as one of those small leaves on the tree in front of Lennox library, holding on tight to that moment and never wanting to let go.

I felt like the conversation could go on forever between my brother and me, not only sharing with each other the dimensions we’d visited in our readings, but also getting to know each other even more. My brother’s face was overcome with excitement when I mentioned that I was soon going to be an actual author myself, and that a story written by me, as well as stories written by my friends, would be published and distributed to hundreds, if not thousands, of people in the United States. And just as I’d discovered that every book in the Lennox Library had the power to transport me to another world, you will now discover the world that this book can transport you to — the world of the Ánimo Venice Students. 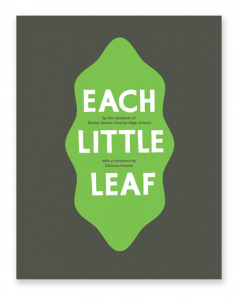 Each Little Leaf, by the students of Ánimo Venice Charter High School with a foreword by Dolores Huerta, is a collection of stories about the smallest moments that end up changing our lives. It is a book about the consequences of the seemingly inconsequential, the inescapable impact of a single moment—of decision, laughter, or even the impact of individual reactions on our realities. An 826LA Young Authors’ Book Project.

This collaborative poem explores the many sides and senses of laughter.

A poem about the strength and limitations of language and shared culture.